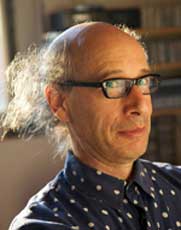 The workshop will be planned for 2 hours, and it may stretch a little longer.

Make sure you have space to move in your room, if possible enough room to make about 8 steps.

According to his mother, Californian Moshe Cohen is a natural born clown. He didn’t realize that until well into his 20’s when, performing as a juggler, the audience laughed. 34 years later, 40+ countries and a 1000+ shows, he continues to expand and develop his funny. These days, Moshe devotes most of his time to teaching. and occasionally touring Mr. YooWho’s Holiday.

As a teacher, Moshe focuses on the human landscape of clown, and developing stronger connections to the inner funny, and how to share that with others. His unique approach to teaching includes integrating aspects of Butoh dance, Zen practice, physical theater. and the wisdom of his teachers. He studied Clown with Richard Pochinko and Ctibor Turba: Physical Theater with Monika Pagneux, Philliipe Gaulier, Sigfrido Aguilar, Daniel Stein Mime School and Mime Centrum Antwerpen; Voice with Roy Hart Theater; Kyogen with Kaoru Matsumoto and Juro Zenchiku, and Butoh dance with Kazuo Ohno and the Tamanos.

Moshe plays a supporting role in Dorris Dörrie’s latest film Grusse aus Fukushima. It is his second collaboration with Dorris, and the first in front of the camera.

Moshe is a pioneer in the world of social clowning. In 1987, Alejandra Alvarez invited Moshe to perform for Guatemalan refugees in Chiapas. After subsequent projects in the Caribbean and South Africa, Moshe joined a Clowns San Frontières (Fr) project to Croatia in 1994. He founded Clowns Without Borders in the US the following year. He led the organization for many years, continues as a board member, and a regular participant in projects.