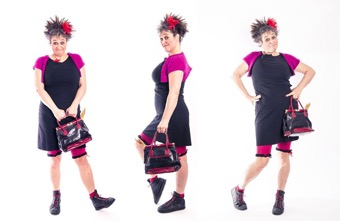 You can hear all about Anna de Lirum and ask her questions about her work, her shows, concerts… She does so many things, this is your chance to find out and learn from her.

She sings! She dances! Even her saw sings a jolly tune. She plays a ukulele in overdrive and gives the honky tonk a taste of Bach. She is fluent in pantomime. Sometimes she even says something. Something funny.

Trained at Vienna’s University of Music and Performing Arts and at the École de Mime et Clown in France, she made her mark as Austria’s first female artist with CIRQUE DU SOLEIL.
As a veteran cast member of PALAZZO, she served deliciously funny comic entrees. She also co-founded the first Clown Theater in Vienna, Theater Olé, and is the driving force behind her very own “Comicompany”. As a member of “Red Noses Clowndoctors” she puts a smile on more than just children”s faces.

As a solo artist, she has been directed by clown legend JANGO EDWARDS (“King of Fools”) and ANDREAS SIMMA (Théâtre du Soleil). Tanja Simma aka Anna de Lirium has earned a place in the hearts of fans everywhere on stages across the globe. International festivals from South America to Scandinavia are eager to feature her work.